Skip to main content
You are the owner of this article.
Edit Article Add New Article
You have permission to edit this article.
Edit
Home
News
Sports
A&E
Opinion
Multimedia
Daily Dispatch
Correspondent
Share This
1 of 2 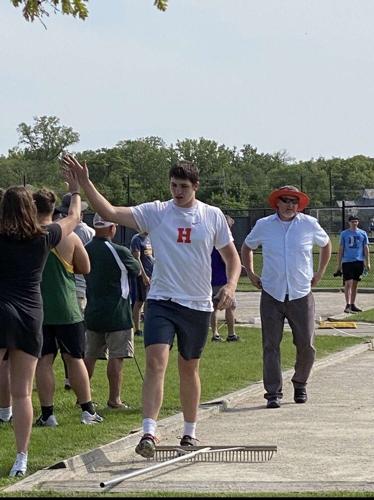 Will Nolan excited, after his throw to win the Sectional Championship for shot put at Glebrook South High School. 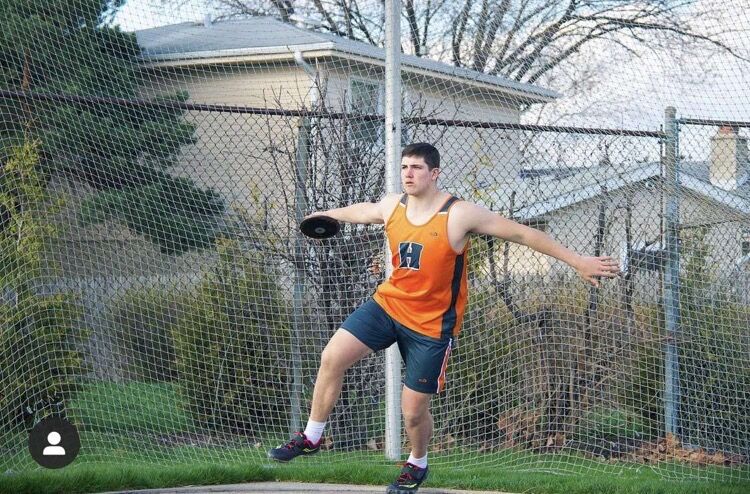 Will Nolan winding up to throw the discus at a home Hersey meet.

This Past Saturday at Glenbrook South High School Will Nolan, a sophomore Hersey student athlete, won his sectional for Shot put throwing an astonishing Pr of 54.59 feet and won the discus with a throw of 144.55 feet. Nolan was the only thrower to make state for Hersey and is well on his way to break the Hersey record on shot put of 60ft. On Friday May 27, Nolan is competing in Charleston Illinois and will try and compete to bring a state championship home for Hersey. Nolans teammate on the track team and Sophomore student Gus Damman had this to say about Nolan “ Will is one of those guys who’s naturally talented and combine that with his hard work ethic, the sky's the limit for him.” Nolan is a 3 sport athlete competing in Football as an Offensive tackle and Nose Guard, Center in Basketball, and obviously a thrower in Track. Nolan stays busy all year in the sports department which keeps him in good shape and ready for the track season every spring. Nolan stands at 6’5 260lbs which gives him great power to hurl the shot put and discus to great measures. “ I just try to continue to lift and stay healthy and the throwing part comes easy to me,” says Nolan. Not only is he impressive on the Field but Nolan’s lifting numbers give him a slight edge on most throwers. With a 300lb bench and well over 405lb deadlift he’s an animal. “ It seems like every meet we have Will sets a personal record and gets 1st, he truly is something special” says teammate Pavle Jovanovic. Nolan gets a ton of credibility from his teammates for his hard work and success in all sports.

It’s not easy to stay focused in 3 sports a year but Nolan is one of a kind. Why Nolan finds so much success in his athletics is his big size which he credits to his never ending appetite which helped him get to 260lbs. As a sophomore Nolan still has two more years to break many more records and hopefully bring home at least one state championship to Hersey for Track. When Nolan got asked what his future plans are for college he responded “ I would like to continue and compete in College for sports whether that’s Football, Basketball, or track. My dream is to play division 1 football at a big named program.” If Nolan continues to grow and stay healthy he could be a strong force in whatever he does in college for athletics. With his size surely college coaches will have Nolan on their radar. Nolan said “ When I first started throwing my freshman year I could only throw the shot put 40 feet and I didn’t even try to throw discus.” Since then he can throw almost 55 feet on shot put. Nolan gives a lot of credit to Coach Rupslauk who coaches him in both Football and Track. Nolan is a humble person which makes him very coachable and fun to be around yet dominating the competition.

What are you looking forward to the most this school year?

Sorry, there are no recent results for popular articles.