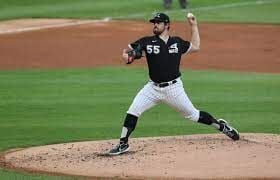 It only took 233 days before there would be another no-hitter on the South Side of Chicago, and this time it would come from the tail end of the rotation.

When Carlos Rodon was drafted third overall in 2014, he was a highly touted pitcher coming out of North Carolina State breaking their career strikeouts with 436 and having an ERA less than 3 all three years at NC state, including a stint on Team USA before his junior season posting a 0.75 ERA in 36 innings. However, Rodon has yet to put up the same numbers in the big leagues with ERA’s all above 3.00 throughout the seasons and below .500 win-loss records. His inconsistent pitching has led to skepticism about the future of success he’ll have in the majors.

Although his outings and numbers have been underwhelming, his injuries in large part is the contributing factor for his mediocrity. After his debut season in 2015, he fell in the dugout and sprained his left wrist causing him to not only spend some time on the injured list, but also finished the season 9-10 with a 4.04 ERA. In 2017, he missed the first three months of the season due to bursitis in his left biceps and then later had left shoulder inflammation that ended his 2017 campaign. Consequently, he made only twelve starts — out of the 34 game average — with a 2-5 win-loss record and 4.15 ERA. The worst injury was yet to come.

The shoulder inflammation carried into the start of the following season and made his season debut mid season where he posted a 6-8 record and a 4.18 ERA. In 2019, he only made 7 starts going 3-2 with a 5.19 ERA before undergoing Tommy John Surgery — the worst injury of them all — on May 15th;Tommy John typically requires one year to rehab, but can take up to two or more. In Rodon’s case, it only took about a year for him to finish the rehab process, but getting back to the dominant pitcher he once was didn’t come in 2020. In the four games that he pitched in out of the bullpen, he went 0-2 with an 8.22 ERA. At the conclusion of the shortened 2020 season, the Sox DFA’d him making him a free agent, but decided to re-sign him and let him compete for a spot in the 2021 rotation. It’s evident that the injuries on top of one another have set him back from looking like the No. 3 pick the Sox had hoped for in 2014.

Nevertheless, he didn’t let his struggles in the majors continue to get the best of him.

On April 14th, Rodon completed the 20th no-hitter in White Sox history, sending him to the history books in Cooperstown, New York.

With every no-hitter or perfect game, the defense is without a doubt that key part for either of those results to happen. The Sox’s defense has been horrendous this season with 19 errors — costing them several games — and, shockingly, the defense didn’t falter that night. There were clutch plays all around throughout the evening, but the biggest one came in the top of the ninth with no outs when Cleveland’s Josh Naylor hit a cheapy up the first base line. Jose Abreu fielded the ball quickly and cleanly and then proceeded to do an awkward dive-slide to tag the corner of the base as Naylor came sliding head first into first base fast. Abreu would be the hero at the end of the night. With that being said, the outcome of the game came down to toes, literally. After that play, Rodon quickly had Roberto Perzez in an 0-2 before a slider got away and clipped Perez on the toe top of his shoe. That one pitched ended his perfect bid. The rest of the ninth continued the trend of the game: a breeze. Rodon got Yu Chang looking at a 1-2 slider inside and Jordan Luplow grounded out to third. As aforementioned, Abreu was the hero. If he hadn’t made that play, the no-hitter and, at the time, the perfect game wouldn't've been in question. In the end though, the most important part about the no-hitter is that Carlos Rodon had just bounced back to the pitcher the Sox knew they had in 2014. At the end of the night, Rodon had 7 strikeouts, no walks, 1 hit-by-pitch and remained to have a 0.00 ERA for the season- a drastic difference between his four appearances in 2020. His story is what made this one extra special.

Rodon became the second pitcher this season to throw a no-hitter following San Diego’s Joe Musgrove, the first in Padres history, who also, coincidentally, lost his no hitter to a HBP.

Coming into the season, he was one of the biggest  “X- factors” and this game by far, proved to both fans and the team that he’s still that reliable pitcher capable of throwing consecutive dominant games. It’s only been a month into the 2021 season, but if Rodon’s last 3 outings have been any sign of what’s to come, then the Sox are going to get some quality pitching from the backend of their starting pitching.