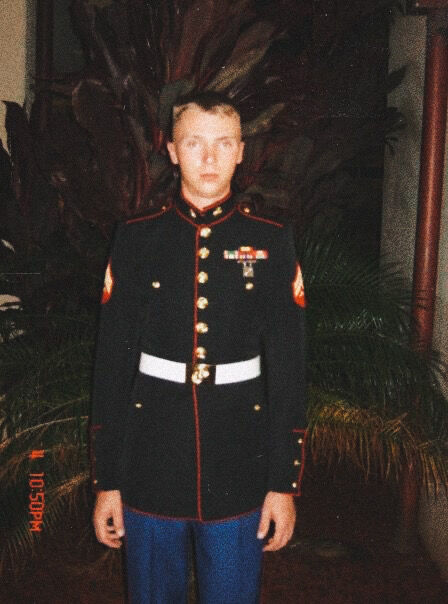 Marine Sergeant Tyler Featherstone in stance for his military personnel photo towards the end of his service. Since 1776, the flag has signified the right to life, liberty, and the pursuit of happiness across the nation. 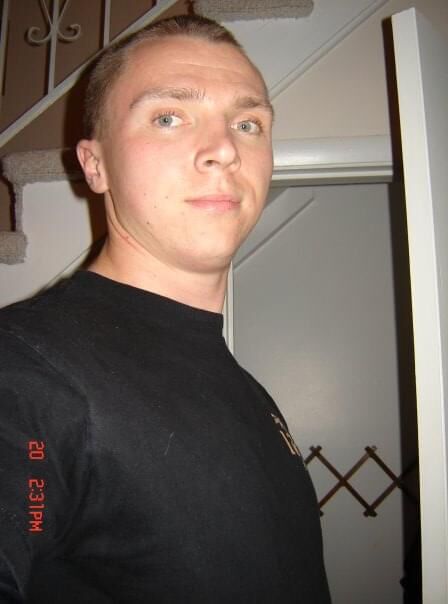 Tyler smiles for the camera back at home in his military tee. 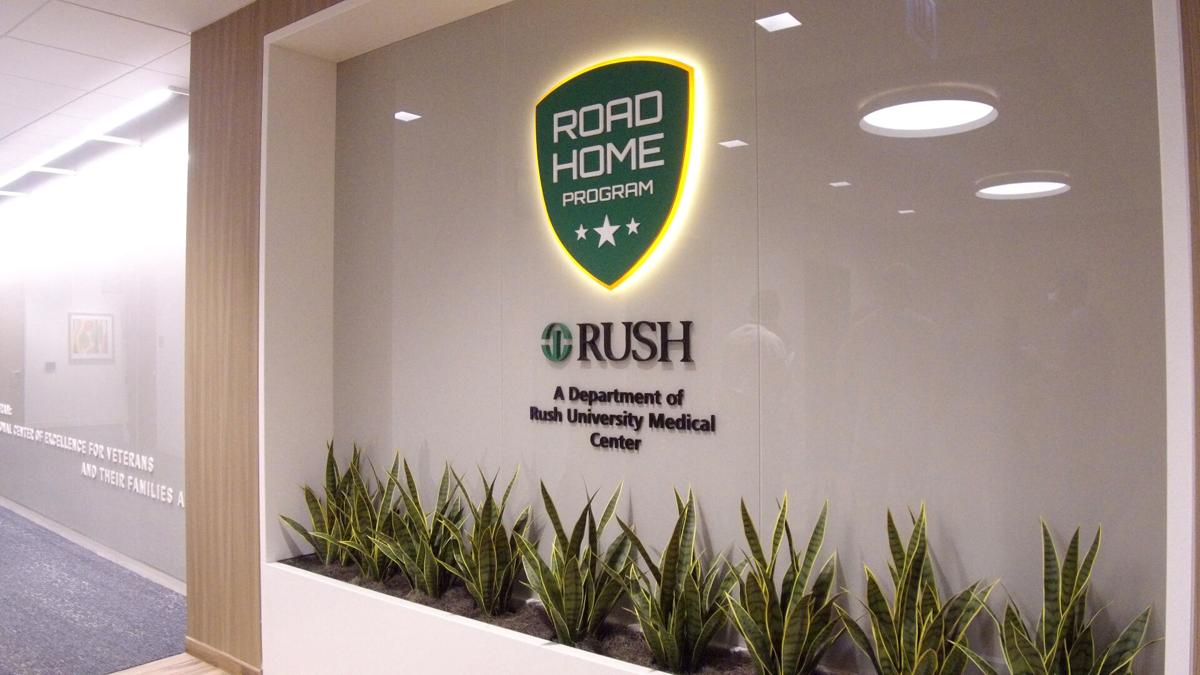 The Road Home Program, located in Chicago, has assembled a world-class team of experts trained in military culture and skilled in the evaluation and treatment of PTSD, depression, and MST (military sexual trauma).

Political and moral issues have engulfed the attention of our country in the past couple of years, inciting chaos and division within the nation. At the same time, the United States remembers the 20th anniversary of the tragedy of 9/11. Our society has been reflecting upon what happened, and what has changed since the event. How has 9/11 affected the level of respect veterans are treated with? The polarized political ideologies existing in the United States most definitely affects how the entire national defense is viewed. Focusing on the concept of considered respect through the specific lens of veterans is most beneficial because being both a soldier and civilian at one time or another, these individuals hold a wider perspective.

Exploring the question of respect towards veterans, research and history show it has not been the greatest. Veterans are twice as likely to be homeless than an average American. Substance abuse is also an issue, affecting 70% of veterans. Furthermore, many veterans have died waiting for care at VA facilities. Veterans of war have been blamed for the outcomes of the war in the past, (post Vietnam war) but how do veterans of Iraq and Afghanistan differ?

To see how, John Hersey High students were interviewed perspectives on the morality of the armed services in 2021. Receiving opinions about veterans from the pool of our own school provides an honest, first-hand account of ways today's attitude towards veterans may differ compared to history. Tyson Shultz, Hersey Junior says “I show respect to the soldiers by the pledge of allegiance every morning and by thanking soldiers if I see them anywhere.” Hersey Senior Jack Alesia says “I believe in dying for one's country, however it does come at the expense of me losing my family for a greater cause.” Callista Mackey, Hersey Senior says “I’m not willing to risk my life for my country, not my passion.” Noah Banty, Junior says “I believe in dying for your country.” I asked some lower classmen as well. Linette Velez, Freshman says “I respect people who die for their countries. If I personally was in a situation where I had to choose to sacrifice my life, my answer would vary depending on the situation.” Freshman Isabel Hinman says, “I think there are other ways to help this country without fighting, when it comes down to it I don’t think I would be able to (sacrifice your life). These students show a respect for the services, but externalize themselves from the responsibility of a soldier.

Back to the question of the way veterans of 9/11 (Iraq and Afghanistan) are treated in society today. As shown through the way Hersey members responded, U.S. civilians are generally more supportive of veterans. Washington State University's Alair MacLean conducted research and studied Iraq and Afghanistan veterans coming home. The results showed that veterans today were welcomed home better than those who served in Vietnam.

Regardless of new attitudes and levels of empathy, there still remains the divide between civilians and soldiers. This raises the question, then, what does it take to be a soldier morally?

I asked my brother Tyler Featherstone, Hersey graduate, and veteran. “What drove me to join the military at first was I felt I would be able to positively contribute and become a better individual at the same time, as well as the brotherhood it offered.”

He continued on how his service was impacted after September 11th: “ 9/11 was a day that changed my life in the military. I was never thinking about getting guns or doing jobs that the military does before 9/11. It made me realize that this was going to be an infantry battle. I wanted to be where the military needed me the most. I entered active duty 06-10-2002 and served with the Marine Corps on duty assignments for Headquarters Company. In my primary specialty 3531 was a Motor Vehicle Operator and was a Roadrunner during Combat Operations. One deployment was with the Navy as an expeditionary force which was equipped and sent to support defense operations in Operation Iraqi Freedom 2.”

My brother wanted to serve in Afghanistan, but wasn’t able to for medical, he got injured on the expeditionary in Iraq. He ended his service 07-12-2009 where his rank was Sergeant.

He told me how his service affected his career. “Military careers have lots of valuable skills that employers can use. Mostly as a veteran it's a bigger challenge to get hired. The employers need incentives to hire veterans. So yes, it will affect the job you get. It depends if you get another government job it can transfer the benefits for retirement.

He explains his perspective on the traumatic aspects of combat. “Issues for combat like PTSD of depression and anxiety are also common .Knowing that the risk of being hurt in combat and possibly killed can be a traumatic issue. You have to handle the stress of knowing you will see people die. During my service I saw people I know who died and that was very unfortunate because they are making a sacrifice. It's also not in a situation where you have a lot of comfort. People will be trying to kill you if you are too complacent. From what I see in deployments is they don't have leadership that have instructions on how to win the war. It's never sure why people are risking their life for the reason they are. Most of the deployments are to get guys promoted and good jobs done.”

Joining the military and putting his life in danger changed him. Everyone in my family knows that he is simply not and will never be the same man that left on 06-10-2002. The changed man shares what he wishes he knew when he was back in Hersey. “I would tell myself to never cut corners. There are many more wonderful experiences after high school. It’s most important to finish well instead of trying to accomplish more.”

Given all of these changes to my brother's emotional well being, morality, career, general demeanor, it's mind boggling to wrap your head around why someone would do such a thing. What sense that the public is coming to realize presently is that those who choose to enlist in the services are not just sacrificing their life and their ego. They also have the maturity expanded way beyond themselves and their families. They see the nation as a collective, and themselves as an insignificant piece. This humble view in addition to the sacrifice each and every soldier incites overwhelming respect, at least in my mind. Though some may disagree with war and physical violence, more Americans are coming to look past those aspects of their morality to respect individual jobs in our armed services. 9/11 was a tragedy that brought the U.S. together through deeper empathy on a collective level, and specifically directed towards veterans as well.