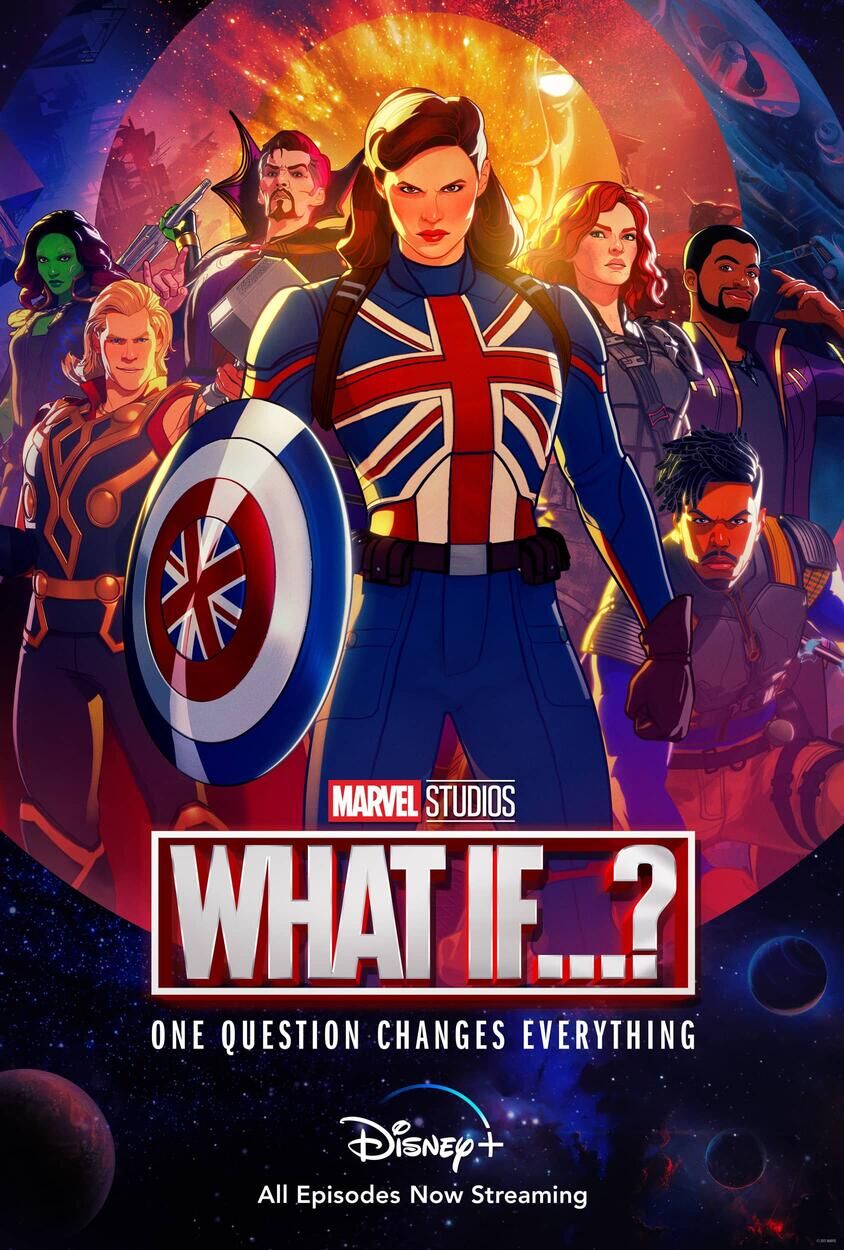 The Guardians Of The Multiverse are assembled, for the final episode of What If.

What if Peggy Carter got the Super Soldier Serum? What if T'challa became Star-Lord? What if… Zombies!? Marvel Studios “What If?” shows us all of these outcomes. The series has been out for a month, with six out of the nine thirty minute episodes being released at the time of typing this. It’s the studios fourth TV series to be released and the studios first animated project to be released. We follow The Watcher, a dimensional being who is beyond space and time and watches over the multiverse, only he cannot get involved, only observe. Instead of following one true main character, each episode follows events that are different from what originally happened, meaning multiple characters can and are in the lead role for every episode. The cast is mostly composed of the same cast as their live screen counterparts, like Chris Hemsworth, Mark Ruffalo, and Benedict Cumberbatch, reprising their respective roles. However, there are a handful of exceptions: for example, Josh Keaten voices Steve Rogers instead of Chris Evans and Hudson Thames voices Peter Parker/Spider-Man instead of Tom Holland. This isn’t a downside at all; in fact, I actually really enjoyed the performances from these actors, and they captured the characters' personalities perfectly, maybe even better than the live action actors.

This series is one of the funnest Marvel Studios projects to be released. The creativity and craziness we’ve seen is phenomenal, from T’Challa convincing Thanos to become good, all of the Avengers dying by Hank Pym, Ultron winning against the avengers, and Marvel Zombies, which if you're a comic book fan you’ll know how insane that is. The best part is that this doesn’t affect the main MCU timeline….. yet, so anything and everything can happen. The animation, while not great at times, is still visually fantastic. When the action scenes begin, the animation quality goes up dramatically, with some fights and scenes being more entertaining and interesting than if they were in live action. With the show not being live action, it also allows for much more creative freedom. This can be seen in episode four, “What If… Doctor Strange Lost His Heart Instead Of His Hands?,” where we see, instead of Stephen Strange losing his hands in the car accident, his lover Christine dies in the crash, and Doctor Strange tries everything he can to get her back, even if it means losing his sanity. We then see a clash between an evil Doctor Strange and a good Doctor Strange, with the fight being a visual masterpiece incorporating both of the characters’ personalities and goals. “I love the series because it’s a way for Marvel to make interesting twists on the stories we’re already familiar with. All the voice actors have done a phenomenal job, and the replacement actors for Captain America, Black Widow, etc. are all great too.” Says senior Harry Gillespie.

The show, of course, had its flaws: the thirty minute length for episodes definitely isn’t enough time for some of these stories leading to time skips (skipping parts of the story), abrupt endings, and a few plot holes- like in the Zombies episode, we are left on a huge cliff hanger with multiple plot holes in the one ending shot. The animation isn’t the best at times and feels very rushed. For example, in the first episode, Steve gets shot in the chest by an undercover Hydra agent when he’s about to get the Super Soldier Serum, and when we see him in that same scene, he has no wound from the bullet. This could, of course, be because of censoring and wanting to keep a PG-13 rating, but it’s still very jaring. The running animations in the first episode also seem off, along with, in episode 5, Spider-Man's swinging is very stiff. Thankfully most of these moments are short and don’t affect the viewing experiences in most cases, but when they’re bad, they really take away from the moment. “I would say my favorite episode is What If T’challa became Star-Lord, because it focused on the space side of the MCU, and the shorter pacing was in favor of this story.” Says senior Dylan Siena.

I really like where “What If?” is going. Give each episode at least an extended run time of ten minutes and improve the animation for simple shots. This would improve not only the quality of the stories, but the writing as well. With the extended run time, stories could be fleshed out more, and we get to spend more time with these characters and the animation; it just makes the experience more enjoyable. It has been confirmed that “What If” will get another season building upon the first season and introducing more timelines. This would explain the abrupt endings to episode one and episode five, but I would say episodes two, three, and four don’t need another episode because their endings give the viewer a clear indication on where the story is going, while the other two leave the viewer with many questions. Especially in episode five, which leaves the viewer on one of the scariest cliffhangers in the entire MCU. “I hope season two offers bigger threats and plot points from upcoming Marvel projects.” says senior Tyler Boyko. I would give season one of “What If?” a solid 7/10. T stories are interesting and have  fantastic acting and decent animation, but the length of the episodes really affects the writing, and the animation really falls off at some parts. If you're interested in the series, definitely check it out. It's a fun watch!