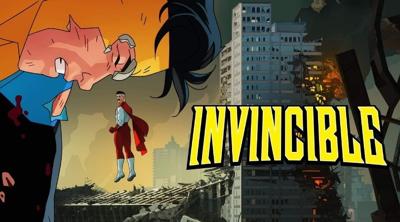 Immortal’s corpse descends from the sky, split in two, beaten to death. Invincible looks on in horror seeing his father split one of the strongest heros on earth in half. Omni-Man flies over to his son and utters the now famous lines “Mark, we need to talk.” What follows is some of the best acting, animation, pacing, and tone I’ve ever seen in any media. What we learn about Omni-man's true origins and his true intentions on why he came to earth is sickening. The fight we see between Mark (Invincible) and Nolan (Omni-Man) is intense not because of who is gonna win it's how that person wins.

Nolan beats Mark not only in hand to hand combat but he also gets to Invincible mentally. Nolan destroys Mark by saying Mark’s mom (Debbie) is like a “pet” to him, kill a pilot by crushing his head right after Mark saved him, throwing Mark into Chicago and destroying a building killing thousands, and even use Mark as a human shield against a subway train by grabbing Mark by the head and having the train collide head on with Mark. What follows is the most gore heavy scene I’ve probably seen and one of the most disturbing scenes ever. Seeing all the innocent humans dying and their limbs just flying around while Mark can’t do anything to help really gets to you. And after all of that we see Mark just sitting helpless, his suit drenched in blood, still saying to his dad “I won’t let you kill anyone else.” Nolan then uses Mark to sink a yacht and finally throws him onto the side of a mountain, causing an avalanche destroying a little village nearby. What follows is heartbreaking seeing Nolan beat his son to death with blood all over his hands and Mark barely able to speak while saying things like “You want to die for this planet? Fine! What's 17 more years? I can always start again! Make another kid!” Nolan then gets a flashback to when Mark was a young kid at his first baseball game, annoyed and saying its pointless that he's there when he can do better things, until Debbie tells him Mark is up to bat, when Mark hits a homerun he runs to his dad asking if he saw his homerun and his dad picks him up with Debbie saying “See, now do you know why we come?” and with a smile on his face Nolan says “Yeah.” With a shot of Mark's happy face. Which then cuts to Mark’s beat up face, all purple, blood dripping all over him. Nolan then gets a moment of shock falling to the ground, laying next to Mark. He then gets back up and starts yelling at Mark again saying how he will outlive everyone he loves and he’ll see Earth crumble, finishing off with “WHAT WILL YOU HAVE IN FIVE THOUSAND YEARS?” with Mark responding, with a tear dripping down his eye, “You dad, I’d still have you.” Nolan looks away, fighting back tears until Mark says “Dad?” and like any dad would do Nolan is about to say something until he realizes what he’s done and so he flies away from Earth at Lightspeed tears filling up his eyes. The winner of this fight ended up being Mark. The rest of the episode is dealing with the aftermath that has been caused by Nolan, the collateral damage is to the max, thousands of people have died, and everyone feels hopeless now. Debbie and Mark are emotionally drained and are still in shock from the events that happen. The episode finished off with Allen The Alien coming to warn Mark about a Viltrumite on Earth and how it’s going to be taken over but of course Mark already knows. We then get a montage of teasers on what could happen next and just like that the episode ends.

What an episode man, it really hits you after watching everything that's happened so far, while watching I really hoped something would happen where Nolan stops and realizes what he’s doing is wrong and things can go back to normal, but no, that doesn’t happen and it makes you feel upset. I’d be lying though if I didn’t say this episode was good and man it’s better than good it's fantastic. The line delivery is beyond amazing, Steven Yeun and J.K. Simmons does an amazing job capturing the emotions and scale of the scenes especially Steven Yeun, when he's yelling at his dad after he said his mom was like a “pet” to him it was fantastic and it almost felt like Yeun was actually furious at Simmons. But oh man that train scene, it’s been 4 days since this episode has come out at the time of writing this but I’m still thinking about that scene. It’s one of the most disturbing scenes I’ve ever seen in my whole life. It is genuinely that gut wrenching. The way it was animated and shown with camera angles and certain lines delivered is insane. I thought Mortal Kombat was bloody, but man, this show has blown it out of proportion. I don’t know what else I can say about this episode that hasn’t already been said. I’m super excited to see where this series goes because based on what they’ve teased and what's been seen in the comics it’s gonna be a wild ride, and I’m ready for it. Who knows, maybe we’ll get to see if the Invincible X Marvel crossover comic is gonna be adapted, only time will tell.